The Art of Sound Design What makes an Engineer a Sound Designer?

When engineering and vision become one, the boundary between engineer and sound designer is transcended.

It’s where every technical tool becomes a musical voice, a ‘device for expression’.

It’s not enough to be a very capable engineer who has studied the mechanical and mathematical foundation of a mixdown studio – one must have an intense desire to shape the sound of any instrument — transcending it to be an organic part of a vibrant tapestry in a cohesive musical landscape.

Monet was fascinated with all the painters that would flock to his property in Giverny, France — an hour outside of Paris.

The wanted to be in the presence of his mystical bridge — and paint it themselves.

Monet said that what they didn’t get was that the magic wasn’t in the bridge — that magic was expressing the bridge.

He spoke to how he didn’t draw the bridge — he drew what was “between the bridge and him”.

The light, and the mood of the day, the wind and the sound in the air, and that ‘thing’ that you try so hard to express in any piece of art that captures an essence…  that’s what he drew.

And that’s why he could draw that space between the bridge and him — over and over again.  Always different.  Always a fresh, bold expression of everything that life is.

And in that magical, and spiritual moment and place…

Is where the art of Sound Design lives. 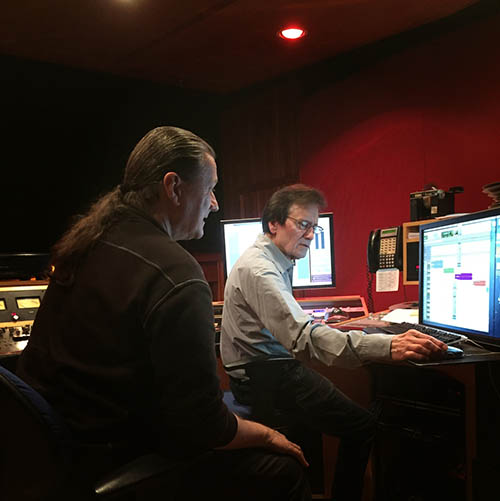 The Grand Master of all mastering engineers, who mastered every imaginable definitive record from “Thriller” to Coltrane and who garnered 14 tech awards and two Grammys, can easily be referred to as one of the finest ears on the planet.

During a recent series of sessions Bernie expressed his appreciation of the quality of sound design that was delivered to him by Stephan as follows:

“I have recently mastered a few albums that Stephan Oberhoff mixed and I can honestly say that, for the most part, I am at a loss to find anything to do to improve his recordings. Outside of an occasional adjustment for consistency, he is spot on, and that’s impressive!

“ONLY A SMALL NUMBER OF MIXERS HAVE REACHED THIS LEVEL OF EXPERTISE. HE CERTAINLY IS ONE OF THE BEST!”
-BERNIE GRUNDMAN

Check out the short track below, I’m featuring the  Virtual Instrument, “Stradivarious,” in an original composition, “Irish Spirit.”

Here’s an in-depth peak in the window of the recording process — and the art of building a song.

In this piece, I’m exploring Brazil’s funkiest rhythm, “The Maracatu.”

From my initial intention to simply re-create a rhythm that deeply fascinated and moved me, it was the springboard to building a more complex piece, marrying the worlds of composition, musicianship, arrangement, sound design, technology — and mixing.  Check it out…